I wanted to address something that I keep seeing, over and over again, in relation to the Repeal campaign – the assertion that “children are aborted right up to birth in the UK for cosmetic reasons”, and links to articles talking about a “huge increase” in this.

Here are just two examples, both linking to the same article: 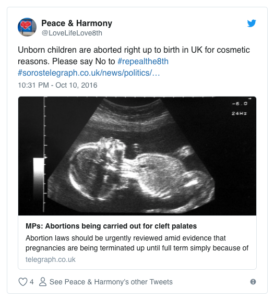 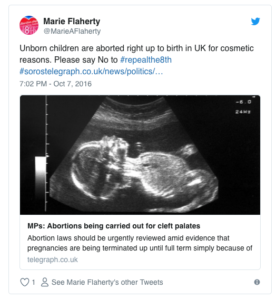 I did some research and found that (as so often is the case) the figures are being misrepresented, and the truth is a good deal more complicated than these tweeters would have you believe. We keep seeing the statement that babies are aborted “up until birth” for “cosmetic reasons”. The implication is that hundreds of foetuses with cleft lips are being aborted at late foetal age, above and beyond the usual termination limits. As per usual, the truth is just a little bit different.

We have to look back to 2012 to see a smaller number, which was 4. The number after 24 weeks was, you guessed it, still zero.

So, now that we’ve addressed the claim of “up to birth”, let’s look at “just for cosmetic reasons”. Note, also, that the various linked documents state not the sole reason, but the “principal medical condition”. Meaning that it may not be the only one. Why is this important? Well, it is well established that cleft lip / palate is often associated with other malformations / issues. It is more than cosmetic.

A study in Pakistan, for example, found that the most common associated condition is congenital heart disease. The Royal College of Obstetricians and Gynaecologists also has an information page detailing the numerous foetal abnormalities which may be associated with cleft lip/palate. In fact, there is a lot of research surrounding conditions which are associated with cleft lip / palate, which include Van der Woude syndrome,22q11.2-related disorders, Robin sequence, Stickler syndrome and Treacher Collins syndrome. More than 40% of children with a cleft palate but not a cleft lip also have one of these associate conditions. Here, the Cleft Lip and Palate association of Ireland, discusses conditions associated with a cleft lip and/or palate.

In short, while cleft/lip palate may have been the primary diagnosed condition, it’s possible (and in some cases, very likely) that another or multiple other issues were subsequently identified which led to a pregnant person choosing termination. There are many reasons why a pregnant person may choose termination. To dismiss these reasons as “just cosmetic” does everyone a disservice. Unless they choose to share them, we can’t know the reasons a person chooses termination. Making repeated (false) claims about cosmetically motivated abortions up to birth casts aspersions on the motivations of pregnant people and implies flippant, superficial, selfish behaviour, or behaviour that one might want to be ashamed of – which is, of course, the exact emotion these claims are designed to evoke. These claims are based on a falsehood that is simply not borne out by the numbers.

People are wilfully misrepresenting this number, and straight up lying about these abortions being performed up to birth. And people are misrepresenting the decision that these people made, and the statistics, to manipulate others. So many people, and groups, are misleading the public about these numbers, about this information. Enough is enough. It is not good enough to imply that many foetuses are being aborted up to birth for cosmetic reasons when the actual numbers do not support this assertion. This is a claim designed to shame, based on a lie. Don’t repeat it.