Burzynski in Ireland; arguing with believers

Earlier this morning, I tweeted a link to this very sad article, in which we are told that a toddler has passed away after a battle with cancer. Though devastating for the family, the story would be otherwise unremarkable, except for the brief mention of the treatment the toddler received. According to the article, the family opted to refuse the chemotherapy (due to the high risk), and instead, opted for Burzynski’s treatment.

I have spoken here before about Burzynski’s treatment, and the fact that I believe it to be ineffective. While I accept that some people will want to supplement conventional treatment with things that help them to maintain a positive outlook, I believe that it is dangerous to eschew conventional (and proven) treatments in favour of unproven and/or dangerous quack treatments, and I believe that it is wrong when this decision is made, not by adults for their own treatment, but by adults, on behalf of children. I realise that this is occasionally a controversial opinion to hold, and this was reaffirmed today, when I tweeted the link to that article, saying:

A #burzynski victim from Ireland – a toddler has passed away after eschewing chemo for quackery.

This prompted a series of increasingly irrational responses from a twitter user known as mrs_bopp, aka, Kate Bopp. I’d like to address some of the arguments that she made in greater detail than twitter will allow, so to my blog I’ve come. I’ve used Storify to capture the conversation in full, and you can see it here, but for the purposes of clarity, I’ll extract some individual tweets/arguments below. 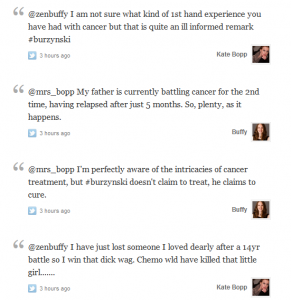 Leaving aside for the moment the fact that my father is battling cancer for the second time, thus providing me with plenty of experience with cancer, its treatment, etc., this is a weak argument. I also have no first hand experience with Hogwarts, but I can assure you that, having thoroughly read and re-read the Harry Potter series, I am extremely well informed about it. Even if there was no one in my family or circle of friends who had ever had cancer (and extremely unlikely situation), merely having been around someone with cancer does not magically make you well informed. Research, keeping up with medical journals, reading about clinical trials; these things will help you to be informed about cancer.

Without meaning to sound callous, is there a single one of us out there who has not had a brush with cancer? I too have seen family struggle with cancer, and have seen friends die of cancer. I have had the unfortunate experience of seeing a child who I babysat occasionally succumb to cancer, and of comforting her friend (whom I also babysat), on the evening of the funeral. Cancer is extremely prevalent, and while I don’t mean to diminish the upset that anyone might feel upon losing a friend or a relative, the loss of a friend or relative does not make your opinion more important than someone else’s, nor does it make it scientific fact. 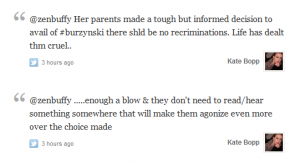 It’s true that reading comments or articles that question the legitimacy of Burzynski’s treatment will not help, in that they will not bring the child, parent, husband, sister, etc. back from the dead, nor will they cure the cancer of anyone considering undergoing treatment with Burzynski. The aim of my comments, blogs, or any other input, is not to upset grieving families, or to “steal hope” from those who have been told that the prognosis with conventional treatment is bleak. My hope is that people who research alternative therapies will also come across information about the controversies surrounding those therapies, and perhaps think the better of spending their life savings, and their last few months, on a treatment which will ultimately leave them unfulfilled, and not cured. My hope is that people will realise that convincing patient anecdotes are not necessarily proof of efficacy, and that they will not be taken in by them.

In recent weeks and months, several people have been taken to court to face charges ranging from criminal mistreatment to manslaughter. The reason? Rather than bring their child to a medical professional, they opted to use “faith healing”. In the case of the Hickmans, this resulted in the death of their son. Is it better that we spare these parents the difficulty of agonising over their choice, than inform people so that others will seek medical treatment? Is it better that we don’t discuss these cases, and stay silent while more people are allowed to succumb to treatable conditions due to their reliance on alternative medicines and faith healing? I have no doubt that the loss of a child is absolutely awful, and I have no wish to bully the parents of these children, but I also do not believe that we should hide from the controversy surrounding these treatments merely to prevent upset.

In the last paragraph, I mentioned that I don’t doubt how awful it is to lose a child. I can’t be certain of how I would feel in this circumstance, because I don’t have a child (or children) of my own, and therefore, have never lost a child. The “Do you have kids” argument is often thrown out as a hook – you reply that you do not, and are told that you, therefore, couldn’t possibly know what it’s like to have a sick child. While I don’t understand the exact specific feelings one has when their child is sick, I do understand that this argument is weak, and essentially baseless. The fact that I haven’t got children does not change the outcome of clinical trials, the misinformation spread about alternative medicinal cures, or the evidence upon which their debunking is based. The fact that I do not have children proves just one thing: that I don’t have children. Another twitter user (@Saoili) replied to this one, and though the tweet isn’t included in the storify, I wanted to include it here, because I believe it speaks volumes:

Late in this conversation, some spectacular back-pedalling occurred, when @mrs_bopp, having first brought the issue of the cost of chemotherapy into the conversation, attempts to turn it around, and say that she never mentioned such things. Unfortunately, the exact free/cheap phrase is one I took from her own tweet, whereby she claims we are naive because we don’t know how much chemotherapy costs.

This is a familiar tactic – chemotherapy exists only to make money for big pharma, and other cures are suppressed to the detriment of the public. Of course, mrs_bopp, like many others, refused to be drawn on the fact that Burzynski’s treatment is far from cheap or free. Even after multiple deflections, and plenty of question dodging, there was no acknowledgement of the fact that, this treatment at least, costs rather a lot. If someone is truly convinced that there is a big pharma conspiracy, there is little that can be said which will change their minds, so the best one can hope for is to point out the logical flaws and call them on the back-pedalling.

If in doubt, question my ability to believe things which are, obviously, beyond my comprehension. Ultimately, if clinical trials prove that Burzynski’s treatment (or any other alternative treatment) is effective against cancer, I will be delighted. It will represent a significant step forward in the treatment of cancers, and an improvement in the condition of patients while they are being treated. I look forward to the day when chemotherapy is not the gold standard of cancer treatments, and when there are more effective, and less toxic alternatives available. Unfortunately, that is not the case. Clinical trials have not proven the efficacy of a whole host of alternative treatments, and chemotherapy remains the gold standard because it works, and has been proven to work. I agree that patient anecdotes are compelling, and the videos and pictures do paint a very rosy picture of Burzynski’s treatment, but until I see some real clinical data, I find it difficult to believe that it is the miracle cure it is purported to be. It is important to keep an open mind, so that when new evidence arises, which contradicts beliefs that you previously held to be true, you can look at the new evidence with an objective, critical eye, and decide if it is conclusive enough to change your beliefs. It is important, also, to make sure that your mind is not so open that all your brains fall out.

The arguments that I saw this morning are by no means atypical, but they continue to be wheeled out whenever someone asks for proof, or evidence, or even just some common sense, so let me be quite clear. I am not out to make sure that people abandon all hope. I am not trying to upset families or ruin lives. I value the truth, even if that truth is not something that I particularly like, and I will continue to do so, regardless of how many people around me do or do not have cancer, regardless of whether I have children, and regardless of how many times I am accused of being heartless, or of lacking integrity. You are entitled to your opinion, and so am I, but neither of us are entitled to our own facts, and nor are we entitled to fill in the perceived blanks in scientific knowledge with whatever nonsense we chose to make up. I will continue to publish my opinion, and will expect that a percentage of people reading will disagree – and if you also wish to publicise your opinion, you too should expect some debate and disagreement – but the mere fact of your disagreement will no more detract from scientific fact than it will stop me publishing those facts.

I typically finish up my blog posts with a summation paragraph, and an attempt at some sort of dry wit, but in this case, I’m going to leave you with a Tim Minchin beat poem which resonates deeply with me (and not just because of these rose quartz healing crystals I’ve been carrying).