Super Mario, the animal abuser? Pull the other one, PETA. 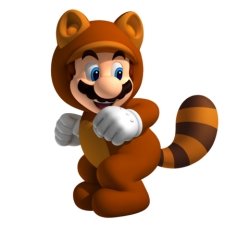 Today, PETA launched a new video game designed to combat the nefarious influence of none other than Super Mario. That’s right, Super Mario is encouraging our kids to wear fur, and promoting the inhumane slaughter of innocent animals to further the fur trade, because at certain points during Super Mario 3D land, Mario becomes Tanooki Mario, and wears a Tanooki suit to signify the change. Tanooki Mario has special abilities, which are granted to him when he manages to grab a Super Leaf. Tanooki Mario’s costume, PETA assert, bears a resemblance to the Tanuki dogs who have been abused (beaten, skinned alive, etc) for their fur. Thus, it follows logically that this game encourages animal abuse. Wait, what?!

PETA maintain that, because Mario is shown wearing fur, he sends the message that it’s ok to wear fur. Which would be incorrect even without the ethical implications of fur, because, as even a child can see, Mario is quite clearly wearing a costume, and not a “fur”. Mario doesn’t skin or in any way interact with a Tanuki dog (or any other animal) to receive his costume, and it is no more sinister (and no more encourages animal abuse) than any other animal based costumes, such as the Easter Bunny or, say, Freeda the Fish, an animal costume regularly worn at various PETA protests, and indeed, paid for by PETA. True, one might argue that a fish costume and a Tanuki dog costume are not the same; after all, those Tanuki dogs are abused, and the costume makes light of it and desensitises individuals to their plight, and as we know, there’s no abuse of fish, and PETA totally support the eating of fish, and are fine with the way they are treated.

Those of you who clicked on that “paid for by PETA” link will have noticed that one of the entries on that PDF is highlighted – the purchase of a walk-in freezer. It would be nice if the freezer was for something wholesome and earth-friendly, like vegan ice-cream, but the truth is that it is a freezer for animal carcasses. The reason PETA needs such a freezer is that it regularly puts down animals which are left at its headquarters. PETA say that it’s more humane to put an animal down if it is unwell, and have spoken at length on their beliefs about humane ways to put down animals, and it’s a hard position to argue against, but it’s only words, and their actions, unfortunately, tell a different story. While making a point about their compassionate euthenasia, PETA neglect to mention that they euthanise over 90% of all animals left at their headquarters. It is implausible that so many animals left there would be completely untreatable, or unsuitable for rehoming, and indeed, when pressed, PETA admitted that “some treatable and adoptable animals were also among those killed by lethal injection”. This seems to be at odds with their philosophy of complete freedom for animals, and the notion that no animal should die an unnecessary death.

PETA say that the reason they euthanise animals is that they would otherwise end up languishing in horrible conditions in animal shelters, and maintain that they are doing them a kindness. It is, I think, a little harder to glamorise or  justify their connections with extreme activist groups such as the Animal Liberation Front, and with activities such as fire-bombing university laboratories, animal breeding facilities, and other buildings. Bruce Friedrich, VP of PETA, has said that “blowing stuff up and smashing windows” is a great way to further the cause of animal liberation, and that while he doesn’t do it himself, he advocates it. PETA paid large sums of money to support Rodney Coronado while he was on trial for the arson attack on Michigan State University’s research facilities, an attack which destroyed years of research and cost the university over $100,000. Coronado has, thankfully, since become more moderate in his views and no longer advocates arson, but before this change of heart, he travelled to schools and spoke about, among other things, how to make incendiary devices to use against objectionable buildings such as research facilities.