When the headline confuses the issue

Writing a headline or title is sometimes hard – I’ve often written an entire blogpost and then spent almost as long wondering what on earth I’ll put at the top of the page. Headlines are important; they draw people in to your content, they summarise and provide some idea as to what you’re writing about, and sadly, they sometimes act as unrepresentative clickbait which serves to confuse.

Yesterday, IFLS published an article about some research into new cancer therapies, an article which they reblogged from The Conversation. The research is interesting – cancer cells stimulate the over-production of a protein which allows them to use glucose to grow faster, and inhibiting or reducing levels of this protein starves the cancer cells, causing cell death. Like many discoveries about the growth, development, and death of cancer cells, this could potentially influence treatment for cancer patients, and that’s good news. The reporting of this news, however, is anything but good. 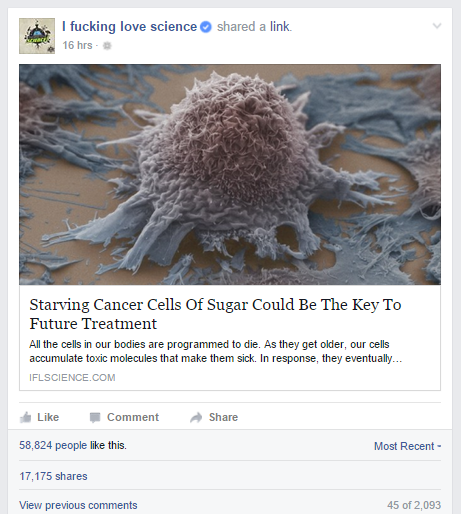 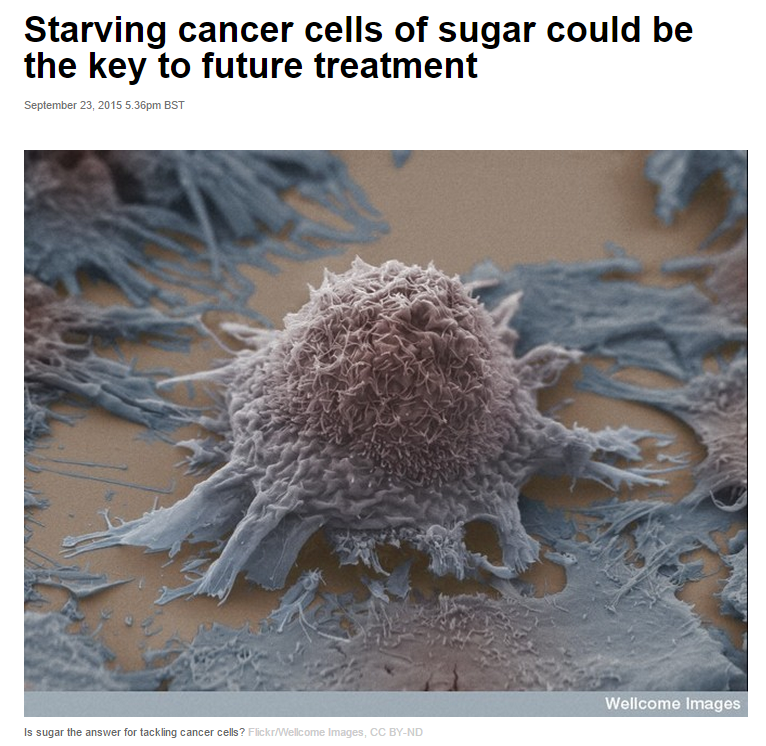 Both IFLS and The Conversation lead with the headline “Starving cancer cells of sugar could be the key to future treatment”. And, in a sense, they are correct. Inhibiting the protein starves the cancer cells by damaging their ability to use glucose for growth. The problem is that IFLS and The Conversation are not the first people to say that “sugar feeds cancer”, even if what they are saying is a good deal more complicated than that.

There has long been a myth perpetuated by cancer quacks and alternative medicine practitioners that sugar feeds cancer. They advocate a diet low in sugar to starve the cancer, putting the body into a state of ketosis, and radically changing one’s diet to remove all sources of sugar. Unfortunately, this seems to be a misunderstanding since research shows that, basically, the cancer cells will find a way to get glucose wherever they can, and that simply depriving yourself of sugar will not prevent the growth of cancer cells. As with many such things, the key phrase is “it’s a bit more complicated than that.”

The article that they’ve written/copied does actually make these points – it links to those advocating a sugar-free diet and the research which shows that this is all not quite that simple. The article talks about the research (which is really centred around this protein, not dietary sugar intake) that was done into the protein, and also notes that cancer cells will “always find alternatives to fuel their tank of glucose, no matter how little sugar we ingest”. But you would never know this from the headline that they chose, and the comments under the article bear this out:

Without reading the article, people are assuming (based on the headline) that the long-held alternative medicine theory that dietary sugar feeds cancer, and that all you need to do to cure your cancer is eat no sugar. And while IFLS can’t be responsible for the myriad of nonsense cancer theories that exist on the Internet, they absolutely can do their part to not add fuel to the fire with clickbait, sensationalist, or inaccurate headlines.

Science communication is important. Accurate, readable, understandable, and representative reporting of science is crucial to ensuring that the truth of a message is not lost. We’ve seen time and time again how irresponsible reporting can colour a story, and mislead the public. If you really love science, in my opinion, it behoves you to do better.

Edit: linked in missing citations (swallowed by a mobile edit during writing!) for cancer/dietary sugar link