On the 29th of May, at around 21:20, I received what I’ll now class as one of the least-fun phone calls I’ve ever had – “You need to come home. There’s smoke coming out of your house, and the neighbours have called the fire brigade”. I can’t begin to tell you all that went through my mind right then; a mixed up mess of panic, trying to think of what I might have done to have a fire start (did I leave the oven on? the grill? candles?), worrying about getting home, imagining for a moment that it wouldn’t be that bad.

As I rushed home (thankfully being driven by a friend), I thought about all the work I had recently completed on the house, and somehow managed to convince myself that it wouldn’t be that bad. I realised, in the midst of all of this panic, that I had turned my dishwasher on just before I left my house, and turned to my friend and said “it’s my dishwasher”. A few minutes later, my mum called me again to say that the firemen had entered the house, and that it was, in fact, my dishwasher that had caused the smoke my neighbours had smelt and seen. On the way, I tried to calm myself down, convincing myself that it would just be my kitchen, that perhaps I’d have to replace some cabinets, clean and paint the walls, and it would be fine. As it turns out, I was wrong.

By the time I got home, the fire brigade and gardai units had left, and the ESB were there, turning off the power to my house; too much potential damage to the wiring in the kitchen, they said, to leave it on. The dishwasher was cooling in the back garden, thrown out there as soon as it was identified as the cause of the fire. Huge fans had been used to clear the smoke from my house, only a small amount of water had been used in the house. As soon as my mum walked to meet me at my driveway, I knew it was going to be pretty bad. I was completely unprepared for what I saw.

My hall, with it’s brand new insulated plasterboard and fresh skim coat of plaster (waiting to be painted), was stained black. Plaster was falling from the ceiling. 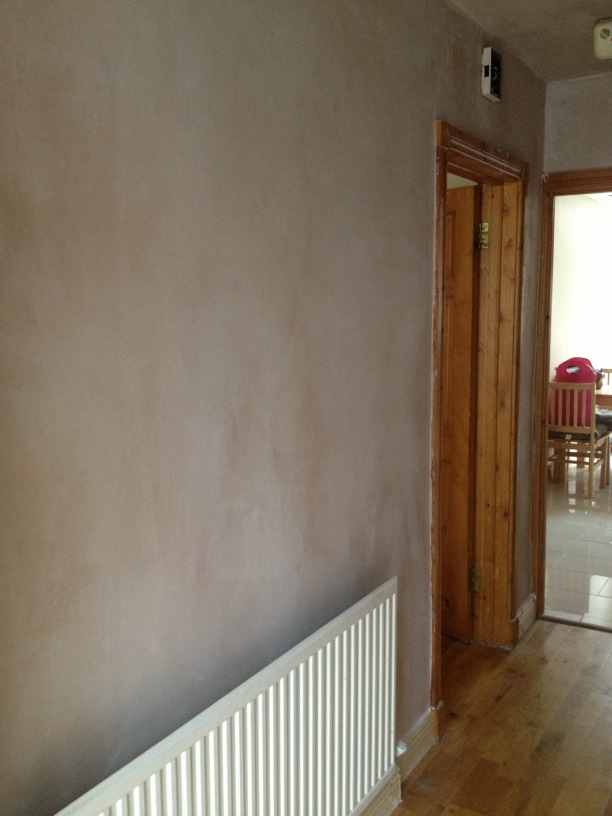 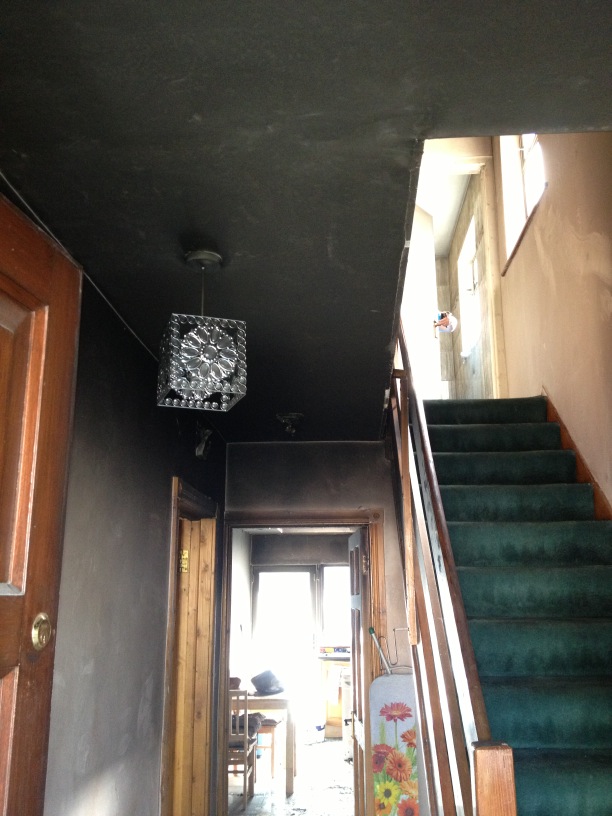 Just over a week before the fire, myself and my mum had painstakingly stripped layer after layer of wallpaper from the walls to prepare them for the plaster.

The dishwasher itself was burned so much that any brand or serial numbers were unrecognisable, it was just a metal shell, full of cracked and melted crockery and glasses. Yes, you read that correctly; melted glasses. 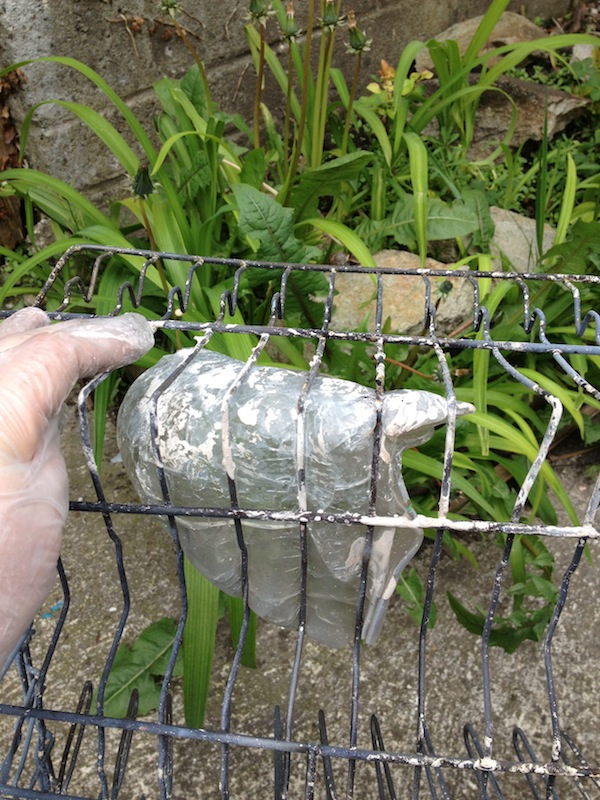 Melted glass stuck to the basket 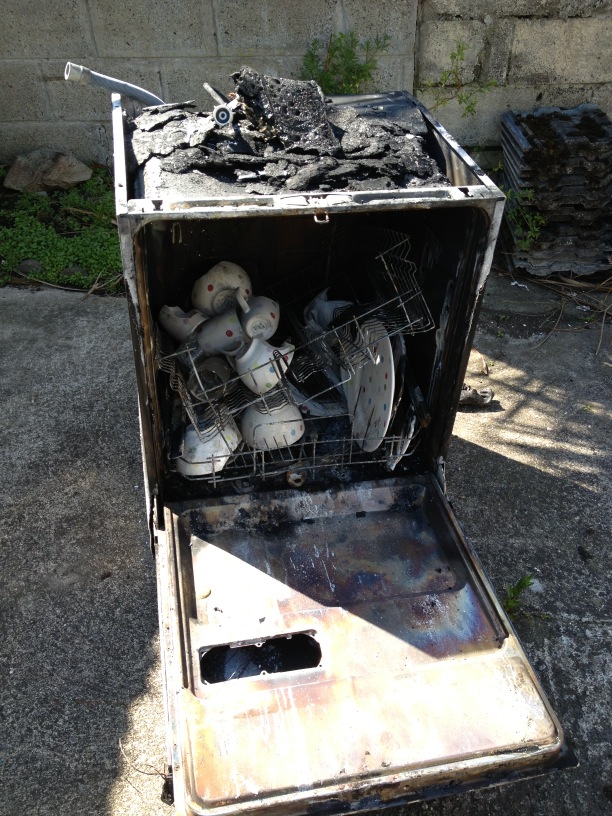 My kitchen, which I had taken from a dark tunnel with awful wallpaper, to a much brighter, more open space, is burnt black. Nothing inside it is salvageable. 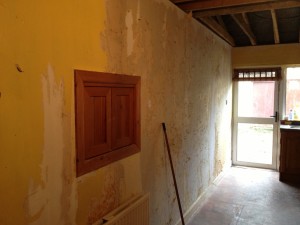 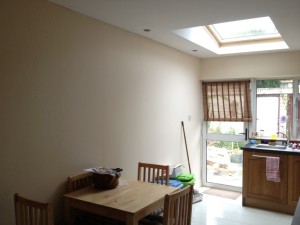 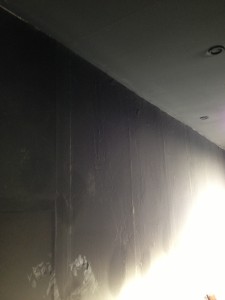 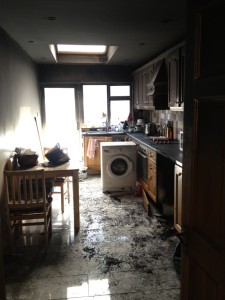 I’m not sure I have the words to describe the smell, or how unbelievably hot it was when I walked into the kitchen that night (I returned to take these pictures the next day, it was impossible to see the scope of the damage by torchlight the night of the fire). The counter was still hot to the touch, and the rooms felt as if I had left the central heating running for days on end. Naively, I thought that my kitchen and hall were the worst of it, were the only things that were damaged. I was in the house for more than 30 minutes before I went upstairs, and realised just how much damage smoke can do.

My bathroom, newly installed, was destroyed. Smoke billowed up the stairs, and the heat from the dishwasher underneath likely caused unseen damage. 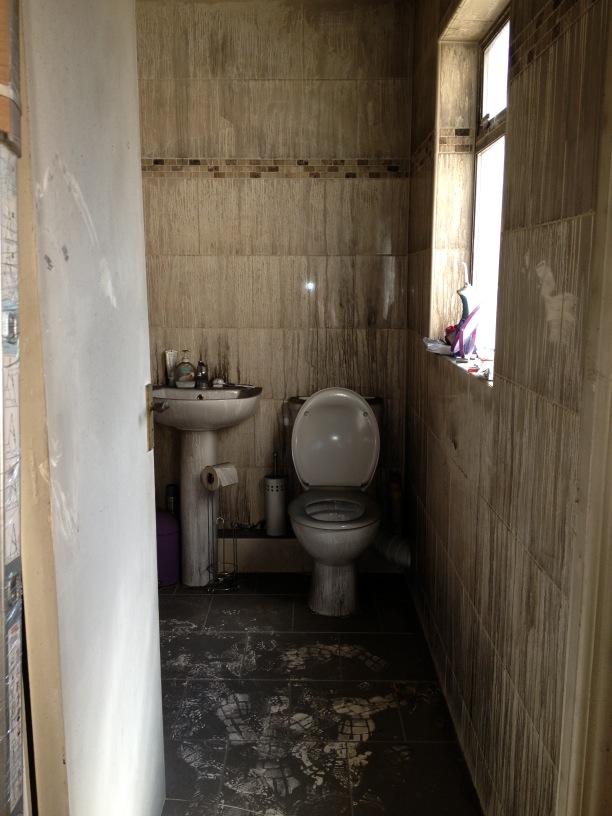 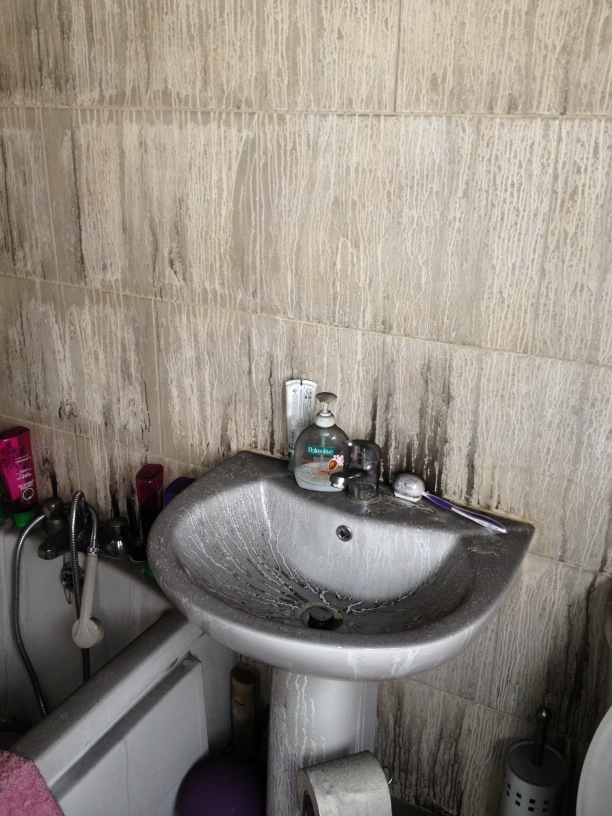 The floor tiles were the same colour as the walls, a mottled beige. The grout, though you’d never know to look at this picture, was cream. All the fittings are newly installed, and are maybe 6 months old.

My bedroom is destroyed, black soot and smoke settled on everything, turning my new white duvet a scary shade of black, and destroying all of my clothes (making my delayed luggage, and subsequent battle with Lufthansa, all the more significant and difficult for me). 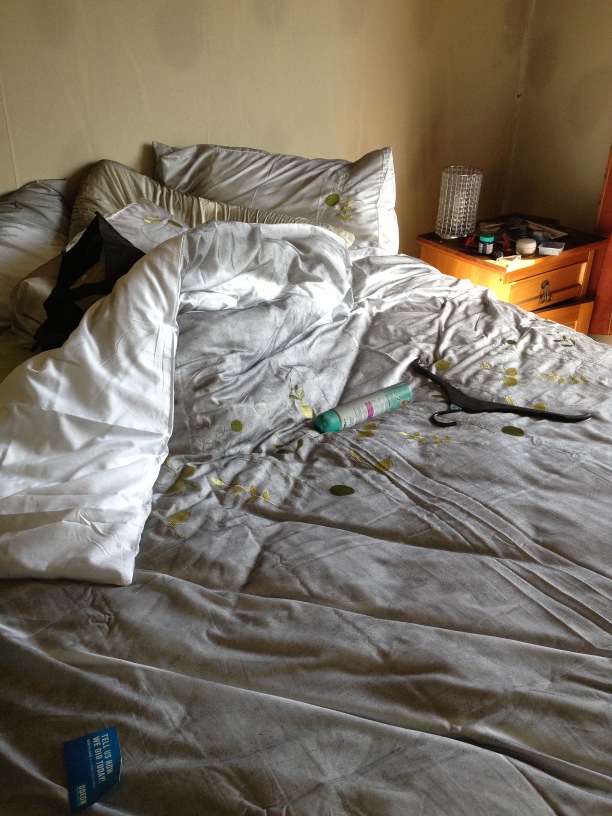 I’ve turned a corner over to show just how black the duvet is. 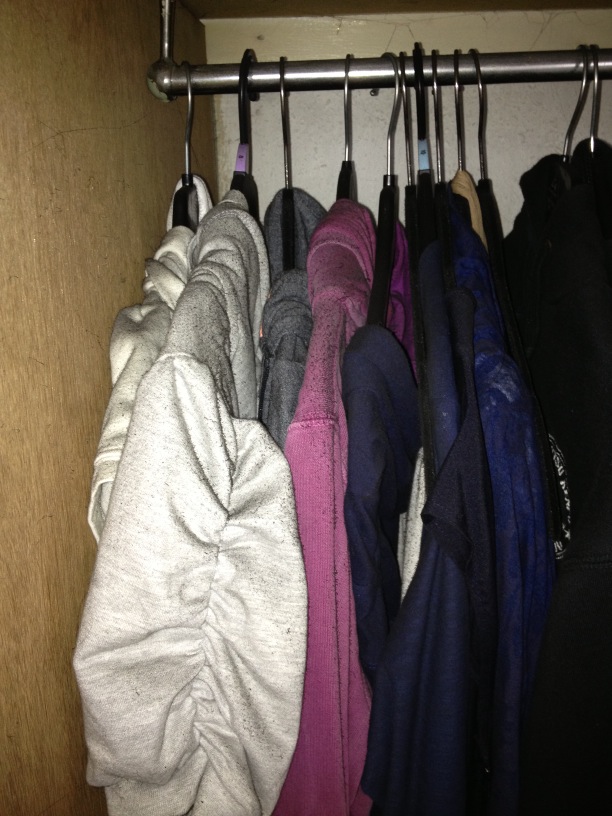 My clothes, visible soot settled on them all. They can’t be cleaned.

In short, every surface is stained and smelly, and everything I own is now more filthy than you can possibly imagine. Every soft furnishing will have to be disposed of because of the smoke and fumes which will never leave them. Every wall stripped, and in many cases, the plasterboard stripped back to the bare brick. Floors must be removed and replaced. Almost everything which is not nailed down is going in the bin, and quite a few things that were nailed down will be following. In about 1.5 hours, smoke and heat destroyed so much more than I could have imagined. 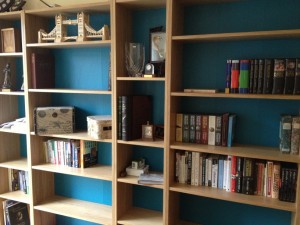 My ikea-hack (a pre-fire picture)

In spite of all this, it could have been so much worse, and so I’m thankful for some small mercies. I am alive, and if I had turned the dishwasher on and gone to bed (as I often did), I’m not sure that I would be. Though I had smoke detectors in the house, I had also been due to start a new migraine medication, to be taken at night due to the strong drowsiness that it caused – with that on board, it’s not a certainty that the alarms would have woken me, and the damage to my bedroom shows how much smoke I would have been surrounded by. I have insurance, so I do not have to foot the bill for the repairs. I am hoping that I will not be out of pocket for the replacement clothing that I have to purchase (and finding clothes is another battle in and of itself), but I can only wait and see. My house, though extensively damaged, is still standing. Many of my most special things were in one of the only rooms that was not too badly damaged, containing my latest diy project – custom built-in shelves, an ikea-hack of sorts (perhaps a blog for another day). I’m thankful that my neighbours are so vigilant – the smelt the smoke, heard the alarms, and investigated. The firefighters said that the countertop in the kitchen had been minutes away from bursting into flame, their quick action likely prevented a much larger problem. I am also very thankful for all of the messages I’ve received, the offers of help, of places to stay, everything. They have cheered me up when I have felt very down, and I have been really touched that so many of you took the time to contact me.

Why share all this? I’m hoping to help people avoid a similar disaster, to learn from my rather hard lesson, if you will. If I had closed more of my doors, the smoke might not have caused such extensive damage, and I might not have been left with nowhere to live, and 2 or more months worth of repairs to be done. If I had gotten around to giving my neighbours some contact information for me, they might have been able to contact me sooner, instead of having to rush around to get my mum (though, of course, this wouldn’t have made a difference to the damage). If I didn’t have insurance, I would be completely lost. And of course, there’s the elephant in the room – my dishwasher. The firefighters who attended my house said that dishwashers were a very common cause of fire, something which I didn’t know, and would never have thought. I was in the habit of turning on my dishwasher before bed, something which I know many people do. So, I implore you to look again at the pictures I’ve shared, at my stained bedroom, and imagine the smoke filling the house while you sleep, and I promise you, the pictures do not do justice to just how badly damaged everything is (I have grown fond of saying “however bad you think it is, it’s worse than that”). If you often turn on the dishwasher before bed, consider this a cautionary tale – break the habit, and potentially save yourself the heartache I’m now experiencing, or maybe even your own life.

A more complete gallery of images can be seen below: