Ten miles in the snow. Barefoot.

Yes, in my day, we had to walk ten miles to school, in the snow, barefoot, carrying our books in our hands, while rabid dogs nipped at our cold, snow covered ankles and tried to steal the lunch that we had to work 27 hours a day to pay for. And we were grateful for it! Well, not really, but it seems that any sort of nostalgic discussion must, inevitably, devolve into a sort of odd, one-downmanship where each had it worse than the one before.

As you may have guessed, this is a post about the good old days, and why I think we shouldn’t give them up just yet. Make no mistake, I am a lover of technology. I’m on almost every social networking site, and my iPhone might as well be grafted to my hand with the amount of time that it spends there. I’m a big fan of computing, and the fact that I no longer have to queue in a bank simply to pay a bill has, on occasion, made me giddy. In short, I wholeheartedly embrace our always-on world, and if and when someone discovers a way to simply transmit information directly to one’s head (perhaps through some sort of implanted USB/Firewire port), I’ll be first in line.

With that said, however, I can’t help but lament at the loss of certain skills which are, in my opinion, timeless. Perhaps it’s  a little “Stepford Wife” of me, but I genuinely enjoy cooking – from scratch. When I bake, there are no mixes. When I cook, there are no pre-prepared vegetables. It’s true that it takes a little longer to peel those potatoes, chop those peppers, and dice that meat, but cooking for real has given me so many valuable skills – the ability to follow a recipe, an understanding of different weight and volume measurements (and conversions between them), and, perhaps most importantly of all, the knowledge of what things are made of. It’s this knowledge that helps me to avoid purchasing completely useless and pointlessly expensive products like this: 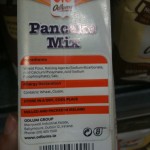 I promise, this is a real product. And the fact that anyone would buy this makes me despair for the future of hungry people everywhere. (If you are someone who doesn’t know why this is so ridiculous, shame on you!) Pancakes are arguably one of the most simple and versatile things you can make in a kitchen, working with both sweet and savoury fillings, and requiring only the most basic ingredients to make – flour, eggs, and milk. Meaning that this pancake mix is, essentially, flour. Flour in a smaller, and much more expensive bag than any other flour available in the supermarket. This fact isn’t even hidden – the ingredients state pretty clearly that basically the only ingredients are flour, rising agents, and a pinch of salt – i.e. self-raising flour. I honestly cannot fathom why anyone would buy such a product…unless there are an awful lot of people out there who are completely unaware of what pancakes are really made of.

This is not just bothersome because I enjoy cooking – it implies that there are plenty of people without a basic knowledge of cooking, something which I consider an essential skill. Convenience foods exist for those times when it’s simply inconvenient to go through the process of preparation, and while a diet entirely composed of them probably isn’t very healthy, they certainly won’t be too damaging. And I’m sure that, sometimes, it’s lovely to be able to bake some bread without having to activate yeast, wait for dough to proof, etc. This isn’t a convenience food though, this is a “we saw you coming” food, as it’s honestly no more convenient that making pancakes the “hard way”, with your unbranded, non-pancake-mix flour. It’s a package of stupidly expensive flour, designed to be bought by people who don’t look at ingredients. And the fact that they continue to sell it (and that people continue to buy it) makes me honestly worry about the future of baking trays and weighing scales everywhere.

There is a genuine joy in making things yourself, and while it may not always be practical, it is almost always fun. For every kitchen disaster, there will always be a really tasty treat (or at the very least, several too-wonky-to-display cakes to dispose of)

Since today is, apparently, National Punctuation Day, I’m going to roll another “back-in-my-day” complaint into this blog – namely, the slow decline of writing and reading skills. (I will save comment on the fact that virtually every day of the year has now been attributed to some cause or other for another blog). Rather than rehash the same arguments about the fact that children no longer read as much as they used to, I’ll simply touch on a few other points instead.

There is a generation of children and young adults emerging from our schools without a number of basic skills such as penmanship, letter composition, spelling skills, and punctuation usage. We are all working increasingly on computers, and this makes it easy to rely on typing as a means of communication, but penmanship is still important. While it is not necessary for every child to have perfect script, it should at least be legible!

One only has to do a quick Google search to see just how many people have no idea how to lay out a letter (be it a personal letter, or a business letter). Reliance on MS Word (and similar) templates, pre-programmed CV templates, and job-search websites has allowed people to simply forget, or worse, not learn how to put together a basic letter. However prominent the internet and email become in business, it is still important that people can put together a professional looking document if they need to. Personally, I cringe when I receive emails that contain the “Hi” and the following message on the same line; I always insert spaces as if I were writing a traditional letter, not just to be a fuddy-duddy, but because it actually makes the email easier to read and understand.

The thing about grammar is that, just like cooking, it’s all bark and no bite. A grammar book might look like an absolute monster, but the truth is that most grammar rules are quite simple, and even make a lot of sense. Just like following a recipe, following those rules and directions will make your final piece, be it a simple email or a preachy blog post, so much better.