What would you do if someone claimed that, because of “geopathic stress”, moving your bed could be the key to avoiding cancer? Well, if you’re the Irish Independent, you give that someone the most prominent picture and article space in a section about cancer prevention and treatment, with the bold headline “The truth about avoiding cancer”. 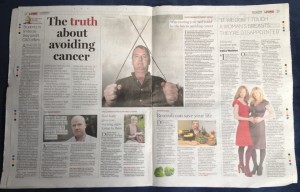 The man in the picture holding the magical pieces of wire is Brendan Murphy, and the article is little more than an advertising piece for his company, Positive Energy. Though the piece starts promisingly by pointing out that geopathic stress is “an area that is still open to debate”, sadly, it fails to deliver that debate. Instead, the reader is treated to a number of claims with a dearth of supporting evidence.

The piece neither provides, nor suggests where you might find evidence to support the claims about Murphy’s dousing abilities (or anybody’s ability to accurately douse), or why electricity boxes and wifi might prevent your body from “restoring itself”, and if you found yourself wondering what planners are interested in geopathic stress lines, and how they could possible hope to avoid them all if they are as prevalent as claimed, you are not alone. A quick search through any academic database will cure what ails you – geopathic stress turning up only in low quality journals and those that focus on complementary and alternative therapies. Whatever strong correlations Murphy claims to have found between illnesses and these imaginary stress lines, it certainly hasn’t been documented in any research papers. 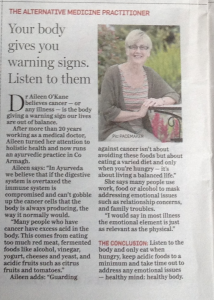 Further down the page, nestled between largely sensible articles from an Irish Cancer Society representative and a dietician, Dr. Aileen O’Kane, now an Ayurvedic practitioner tells us that “if the digestive system is overtaxed the immune system is compromised and can’t gobble up the cancer cells that the body is always producing, the way it normally would”, and in a nod to the thoroughly debunked “alkaline diet” craze, that “Many people who have cancer have excess acid in the body.” The conclusion, highlighted for you in a section of its own, is to “keep acidic foods to a minimum”. O’Kane believes that any illness, including cancer, is the body’s warning sign that our lives are out of balance.

Our lives aren’t the only things suffering from a lack of balance – increasingly, in the name of journalistic balance, legitimate and accurate information is overshadowed by misleading quotes and scaremongering by those brought in to “balance” the piece. It’s one thing to include dissenting opinions when discussing the latest trend in fashionable shoes, or whether some movie lives up to the hype, but medical science isn’t about which opinion is more popular or compelling, it’s about evidence.

These articles might pay lip service to the lack of evidence by saying things like “still up for debate” or “Dr. Someone  believes that”, but placing these articles next to pieces by legitimate medical professionals lends them a degree of credibility which they often don’t deserve. When articles like these are published, the trust that is placed in well-respected and nationally read newspapers such as The Irish Independent is extended to the people who make claims about alternative therapies. They are claims that shouldn’t be trusted, claims for which they should have to provide evidence – but the mere fact of publication often means they don’t have to.

Every time an author discusses serious medical conditions like cancer, and decides that appearing to be “neutral” is more important than reporting accurately, they perpetuate the idea that alternative and unproven therapies are as legitimate as proven ones, and that when it comes to treating these conditions, everyone’s opinion is equal, even if those opinions come with no pertinent training, no supporting evidence, or an eye-watering price tag. Encouraging people to “think about” these alleged cancer causes and prevention methods essentially encourages baseless worry, reaching down to a fear of terminal illness and death that we all possess, and as no effort is made to draw a distinction between the sensible advice (eat a healthy, varied diet) and the more ridiculous advice (magical invisible lines under your bed), the overall impression one is left with is that each of these “truths” about cancer prevention are equally valid. Alternative therapies are alternative because they have either not been proved to work, or have been proven not to work, and including these therapies, simply so that you can call your piece balanced is irresponsible to the point of dangerous – a lesson which The Independent sorely needs to learn.