Yesterday, I received a notification about a comment on a previous blog of mine. When I logged in to approve the comment, I noticed that the visits to my blog had spiked unexpectedly, and when I viewed the comment, and my site stats, I found out why. My blog was linked to by Jennifer Ouellette in a blog which was published on the Scientific American website. Understandably, I was curious as to what had brought my blog (relatively small as it is) to the attention of someone posting on SA, so I headed on over to see. Unfortunately, I wasn’t that thrilled with what I found. The blog was about the recent “elevatorgate” furore, and about sexism in science in general, and it seemed that my blog had been referenced in, what I believed to be, a rather unfavourable light.

After the link was brought to my attention, I posted about it on twitter, wondering whether Ouellette had actually read my blog (since she seemed, in my estimation, to be misrepresenting what I had said, and indeed, who I am). You can also see her (slightly confusing) reply in the tweet linked above. I attempted to continue the conversation, by explaining that I wasn’t offended, but didn’t agree with how she had referenced me (those tweets read from last to first, to get the sentences in correct order). I had hoped to engage in further discussion with her on the point, but that hope was quickly quashed by, arguably, one of the more dismissive responses I’ve received in recent times – “Interesting that in a 3000 word post with 25+ links, you’re making it all about you.” My final reply (again, read from bottom to top) attempted to call her on this behaviour, but she obviously considered the matter closed, as I’ve received no further reply. 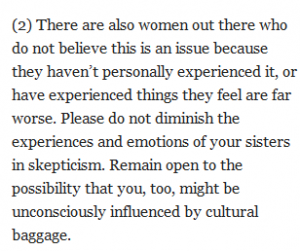 Many of you may wonder why I’m even bothering to blog about what is, let’s face it, a relatively minor slight on twitter. Well, the truth is, I’m not really writing about that; I’m writing about the value of integrity and honesty, and the will to stand behind something that you have written, even if others do not agree. I’ve pictured the paragraph in question here. The truly astute among you will probably notice that, although I’ve obviously taken a screenshot of the paragraph in question, there doesn’t appear to be a link there. That’s because there isn’t … now. Some time after my twitter comments, the link to my blog was quietly removed without comment. I received no message to tell me it was done, and no comment appears on the article to indicate that it was further edited after being published. If it wasn’t for the fact that I have web data records to prove the visits coming from the blog, the link might never have existed. And, frankly, that’s more than a little pathetic.

People say that newspapers are dying, and that internet media (particularly blogs) are the way forward. With this in mind, a great many bloggers have been catapulted from relative obscurity to internet-fame as the modern journalists and commentators of our time. Being able to put together a blog, however, doesn’t necessarily mean that what you have to say is worth anything. What makes certain blogs stand out is the quality of the writing, and often, the willingness of the writer to stick with their beliefs and convictions, even if others disagree; it’s much harder to ignore disparaging comments than to accept praise. Standing behind your writing, possessing integrity, means that you don’t bend at the first inkling that someone might not agree with what you’ve said; it means that you write what you believe to be true, you check your facts, you check them again, and you maintain a standard that doesn’t bend whenever you’re too lazy to maintain it; no secret-editing, no phone hacking, no shady journalism.

There was a time when being a writer, or writing for a major newspaper, was a respected profession, and one I even thought about entering into myself. As we uncover more about the phone hacking, lazy journalism, and illegal dealings of News International (who are, sadly, not alone in engaging in these activities), it’s more important than ever that those of us who write hold ourselves above this. When I write here, I write what I genuinely believe in. I source and check my facts, and if it’s not certain, or not legal, it’s not in my post. I don’t change my posts after I’ve written them to better suit my mood, or to avoid something that I don’t want to deal with. I stand by what I write, even if others don’t like it. If a small-time blogger like me can manage, surely someone like Jennifer Ouellette can at least try?